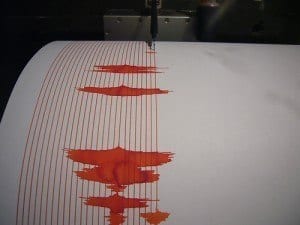 An earthquake in California Monday morning covered 120 miles of land, the largest recorded in the Los Angeles area in three years.

When the earthquake first occurred, seismographs recorded three separate earthquakes of different sizes because of foreshock and aftershock. However, there was only one earthquake, and it registered at a magnitude of 4.7.

Shock from the earthquake traveled from the San Jacinto Mountains to Los Angeles, over the 120 miles shocks are usually felt from earthquakes of a 4.7 magnitude.

Seismologist Susan Hough told the LA Times that the large reach of the earthquake was due to the granite content in the mountains, which transmits energy more efficiently.

The San Jacinto fault zone is one of three fault zones that absorb friction from the motion of the North American continent and the Pacific plates rubbing together, and this type of activity is typical, according to Seismologist Robert Graves.

“It’s a good idea to take it to heart and make sure you’re prepared,” Graves told the LA Times. “We live in Southern California, and we have lots of active faults, and every once in a while it’s large enough to cause damage.”

According to the U.S. Geological Survey, Monday’s earthquake had over 100 aftershocks that traveled northeast from its birthplace in Southern California, meaning that the earthquake occurred on a secondary fault of the San Jacinto fault.

Hough said the aftershocks were weak because of the depth of the earthquake.

No damages or injuries were reported from the earthquake.

Conan O’Brien weighed in on the incident, tweeting, “Felt a big tremor yesterday in LA. That was either an earthquake, or Ryan Gosling smiled softly in Southeast Asia.”