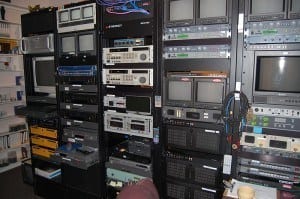 After a veteran does not immediately get his way

A man entered WIBW-TV and stabbed two employees yesterday morning after the Department of Veterans Affairs appeared to mishandle his case.

Miles actually waited for 10 minutes before breaking through the door, but the Kansas TV stabbing occurred after members of the Kansas TV station’s staff ran out of Miles’s way in fear. Miles was holding a knife and proceeded to stab employees.

“A few moments later several employees tackled the man near an east exit of the building,” the station reported.

Miles reportedly told someone to hit him, as he continued to storm the hallway. The receptionist alerted employees to escape the front office; many evacuated the building and the Kansas TV stabbing.

As police held Miles down, he was heard yelling, “I’m going to f—in’ kill you all!”

Miles and the two men he allegedly stabbed are now in hospital care after the Kansas TV stabbing. The injuries are not serious, according to Fox News.

The assailant is African-American and appears to be 5’8” as caught on tape and is carrying a black and green backpack.