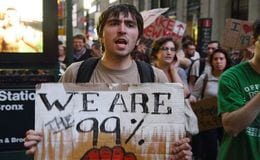 Occupy Wall Street is a leaderless movement made up largely of young adults upset with the economy, the Afghanistan war, the environment and the state of America and the world in general. In less than three weeks, the movement has gained large support from countless disaffected Americans.

As the popularity of Occupy Wall Street spreads, social media sites such as Twitter are spurring similar protests in other cities. A Twitter account called Occupy Boston mentions a citywide college walkout.

According to CNN, the Massachusetts Nurses Association says hundreds of the city’s nurses will rally along with the Occupy Boston protestors Wednesday. The association says the protest will be part of the opening day activities for a national nursing convention in Boston.

The protest campaign began in July with the launch of a campaign website calling for a march and sit-in at the New York Stock Exchange. Besides New York and Boston, protests have been held in Chicago, Los Angeles and Seattle.