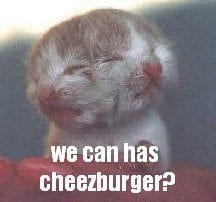 A two-faced kitten was born on Tuesday in Oregon. You heard that right. A kitten with two faces.

Owner Stephanie Durkee couldn’t believe it either when her kids told her about the kitten.

“The kids … came in and said, ‘Mom there’s a kitty with two heads,'” Durkee told Portland’s NBC affiliate. “And I said, ‘I think you guys are just tired, you’re crazy, that doesn’t happen.'”

The mother rejected the two-faced kitten, so Durkee has been feeding both faces using a syringe. Animals often reject offspring with deformities, as in the wild, such young aren’t likely to survive long. The family has named the kitten Deucy.

Two-faced cats are rare, but not unheard of. Often called “Janus cats” after the two-faced Roman god, most kittens born with two faces don’t survive long. Two born in the states in 2012 both died within a few days of their births. The kittens were named Harvey Dent (after the two-faced villain from Batman) and Gemini.

But with the right care and luck on their side, two-faced kittens can live long lives. Frankelouie was inducted into the Guinness Book of World Records in 2011 for being the longest lived two-faced cat. He was 12 years old.