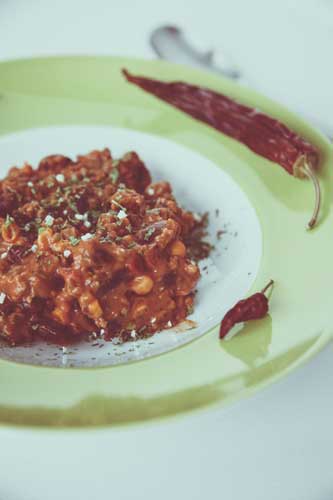 TV Chef Jeffrey Saad shares with College News a few seasonal twists this Halloween; a great time of year to be talking about chili choices. There is nothing quite like a bowl of chili as the temperatures drop. That is why October has long been known as National Chili Month, and even though you may have a family favorite, Chef Saad prepares a dish that is hearty, warm and tasteful all year around. Now the host of United Tastes of America, Chef Saad has partnered with Bush Beans to bring a new seasonal twist based on the results of survey findings. Revealing how Americans prefer to eat this hearty dish, Chef Saad tells College News a few tricks that will add more flavor and texture to your favorite dish. He has also written multiple cook books and has been featured on several TV cooking shows including Chopped-All-Stars, Moveable Feast and Iron Chef America.

College News: What is it about chili that makes it such a family favorite?

Jeffrey Saad: I think we all love the one-pot pleasures. Preparing a great soup or a great stew, is a great way to gather people and have a fantastic meal. Chili is the best version of that one-pot dish! I think it’s great, because every family has its go-to recipe. Whether it’s mom’s recipe, your favorite TV chef or something you have been doing since college, people have the chili they love. The one thing they all have in common is that they are all delicious. But what inspired me as a Chef, is that there are endless ways to amp it up and put a twist on your favorite chili, as well as creating a new ideas.

CN: Your hometown is Los Angeles and you are the host of United Tastes of America on the Cooking Channel. Being that LA doesn’t get chilly, how do people prepare chili during the Halloween season?

JS: Our version of chili is when it gets below 70 degrees. The fire places start and we love to eat chili. As a result, maybe I’ll do a white chili and then, in the dead of winter when it gets closer to 60, we will switch to a black or kidney bean chili.

CN: What are some of the most popular ways to make chili?

JS: I think that what is really popular right now are these [Bush Beans] chili beans. Bush Beans does a great job of giving you huge flavor right in the can. They take the kidney beans and simmer them in a chili sauce. They do the same thing with the white beans and the black beans. This white chicken chili is a fun one because there are two ways you are getting texture. There is a cream of chicken soup in there, but also half of the can of the white beans are smashed, and then stirred in. The black bean chili is vegetarian, but it has the kidney beans that give it almost a meaty quality. So these options are a great way to start. Then you can start playing with the toppings.

CN: Is there anything extra what we can add this season?

JS: Absolutely! Once you have your chili going and it is kind of simmering away you can think—hey what am I going to do with those toppings? Chili is such a simple and quick meal to make. You can spend a little extra time on the toppings to make it unique. Char some chilies—whether it’s bell peppers or jalapeños—char them, blacken them and peel off some of the black. Put them in a bowl and it can add a little heat. Take the onions and grill them or caramelize them in a pan. That gives you a little sweetness and texture. You can always use some cheddar or Jack cheese, but why not a little bit of manchego cheese or a creamy goat cheese that will kind of melt and make a creamy texture? You can also add sour cream and stir in some paprika to get a beautiful bright orange color. Maybe add rosemary or fresh chopped cilantro. I do a cilantro pesto and mix that into a Mexican chili.

CN: Where can we go to get more recipe inspirations?

JS: I definitely recommend going to Bushbeans.com. I ‘ve partnered up with them to create great recipes. There are a lot of great tips there as well. Whether you’re an experienced Chef or someone who is just starting to play around in the kitchen, you can get a lot of inspiration from the website. You will have great chili all year long!