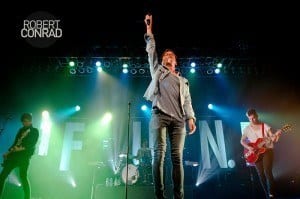 The American indie band performed the slower-paced ‘Carry On’

Fun., the once indie pop turned top 40 band, acted as musical guest for the Nov. 3 episode of Saturday Night Live. Although the band is known for their vocal-laden track We Are Young, the group opted not to perform last year’s hit.

Fun. performed the title track from the 2012 album, Some Nights, which was released in February 2012. In addition to Some Nights, they also played a new track titled Carry On, the video for which has been recently released. Bringing both high energy and slower-paced anthem to a recently tragic New York City, fun. led those in the SNL audience to try to forget the devastation that was Hurricane Sandy.

Fun.’s performance on Saturday Night Live complemented the comedic styling Louis CK brought as the live show’s host. With skits such as an Abraham Lincoln spoof of Louis CK’s FX show Louie and a parody of NYC Mayor Michael Bloomberg’s signer during a press conference, both fun. and Louis CK brought life back to New York City.

The band is a melting pot of other indie bands, including Nate Reuss who once crooned for The Format, and Andrew Dost of Anathallo and Jack Antanoff of Steel Train. Antanoff is rumored to be dating Lena Dunham, creator and star of the hit HBO series Girls.