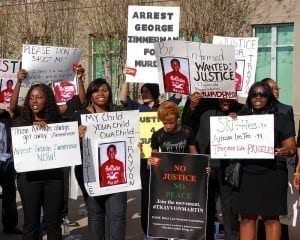 Trayvon Martin may never see justice as getting a conviction might prove difficult.

Veteran State Attorney Angela Corey said that even if George Zimmerman is charged in the death of Trayvon Martin, getting a conviction would be “more difficult than a normal criminal case,” according to NBC News.

Zimmerman has been claiming self-defense in the Trayvon Martin case all along, and his attorney, Craig Sonner, has indicated they will invoke Florida’s “stand-your-ground” law, which provides significant leeway for someone to use deadly force if they feel their life is in danger. Zimmerman reportedly suffered a broken nose and a gash to the head as a result of his encounter with Martin, and Sonner told ABC News that Zimemrman felt “one of them was going to die that night.”

Corey told ABC News that the state must prove its case beyond a reasonable doubt, which makes the case more difficult. She also said the prosecuting the death as a hate crime might not necessarily lead to a conviction. “It would depend on which charge, if any, we’re able to file,” said Corey. “Before we would be able to determine, one, if this is a hate crime, and two, whether or not that would enhance the crime.”

According to ABC News, Corey is “known for her zealous defense of victims rights [and] was hand-picked by Florida Gov. Rick Scott for the job.” The Sanford Police Department has been accused of “bungling” the investigation, and Corey’s team is in the process of reinvestigating the case. Possible police blunders include failing to administer a toxicology exam on Zimmerman, not impounding his car and failing to contact key witnesses.

Zimmerman shot and killed 17-year-old Trayvon Martin the night of Feb. 26. Zimmerman told police that he followed Martin because he was suspiciously wearing a hoodie, and when he confronted him, the two fought. The altercation ended with a bullet in Martin’s chest.