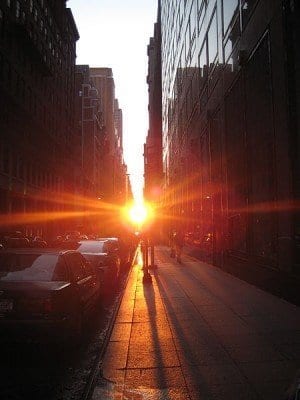 Manhattanhenge tonight marks a bright introduction to the year’s spring solstice. The sunlight’s reunion with Manhattan’s skyscrapers is Manhattanhenge, which will shine through the east and west sides of every cross street of the area’s grid.

A combination of the bustling city’s name and England’s Stonehenge, Manhattanhenge is the connection between the sunset and Manhattan’s skyscrapers. The reason the event is named “Manhattanhenge” is indeed its similarity to the sun’s union with the calendrical stones lining the Salisbury Plain of England, to mark the solstice.

This year, the Manhattanhenge phenomenon is predicted to take place tonight at 8:17 p.m. and again on July 11th at 8:24 p.m. The reason Manhattan’s spring and fall solstices fall on days other than the first days of spring and fall is that the street’s grid is rotated about 29 degrees to the east.

Last night the half sun appeared at 8:16 p.m., and the same will occur on July 12, the evening after the next Manhattanhenge. The second half sun of Manhattanhenge will appear at 8:25 p.m.

Neil deGrasse Tyson, inventor of the name “Manhattanhenge,” called the bi-annual sunset “…A rare and beautiful sight,” adding, “These two days happen to correspond with Memorial Day and Baseball’s All Star break. Future anthropologists might conclude that, via the Sun, the people who called themselves Americans worshiped War and Baseball.”

For those planning to see or photograph Manhattanhenge, Dr. Tyson advised, “For best effect, position yourself as far east in Manhattan as possible. But ensure that when you look west across the avenues you can still see New Jersey. Clear cross streets include 14th, 23rd, 34th. 42nd, 57th, and several streets adjacent to them. The Empire State building and the Chrysler building render 34th street and 42nd streets especially striking vistas.”

Getty photographer Mario Tama said, “If you get out of the subway at 34th Street, you’ll see two or three hundred people with tripods jumping in the street. Usually when this happens, there has been a shooting or something, so this is really a beautiful thing,” says Tama.

Manhattanhenge is a break from the city’s typical rush.