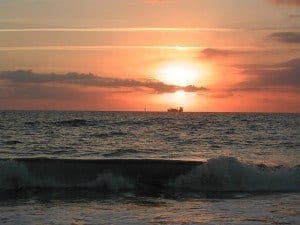 Orange Crush, an unofficial gathering of college students and young adults along Georgia’s coast, left tons of trash in its wake this weekend, leaving many Savannah residents outraged.

Tybee Islander Tony Abruzzio and his fiancé were walking along the beach Sunday morning when they encountered the mounds of trash left behind by Orange Crush party-goers. Abruzzio was so appalled that he shot a video displaying a section of the island cluttered with cups, bottles, other trash and clothing, which he then posted to YouTube.

“Bottles, broken-up ice coolers, towels — you name it, all over the place,” Abruzziosaid. “It was really unnecessary and unneeded… This is why Orange Crush has got such a bad reputation on Tybee.”

Abruzzio, along with volunteers from Savannah State University, the Tybee community and even some tourists managed to get the beach clean in a few hours.

The Orange Crush event used to be sponsored by Savannah State but is no longer. The party still continues however, despite school distancing itself and recommending that students not attend.

WSAV spoke with Tybee Mayor Jason Buelterman who said they found out about Orange Crush just a few days prior, and the city didn’t have enough time to prepare.

“Usually when people have events, they go before City Council, acquire permits and meet with us so we can all work together. This was not one of those events. Every year they go to a different part of the beach, so we have no way of knowing where they will end up. You almost need a mobile crew to deal with the litter.”

The City of Tybee released the crime data related to the Orange Crush event. There were 78 calls placed to dispatch and 55 incident reports generated. There were 18 arrests and of those were six felony drug arrests, according to the city. There were 30 citations issued. There were two auto accidents involving four cars.