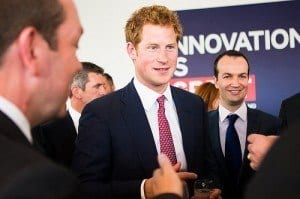 Will Cressida Bonas marry into the British Royal Family?

The world’s most eligible bachelor may be no more. According to rumors and mass speculation, Prince Harry and his girlfriend Cressida Bonas may tie the knot next year.

“Cressie is going to marry Harry,” a friend of Cressida told The Telegraph.

After much hesitation about marrying into the British Royal Family, Cressida Bonas seems to be warming to the idea of getting hitched to Prince Harry. The partying prince was reportedly charmed by Bonas’ free-spirited ways and has planned to marry the 24 year old dancer for some time.

“Harry never stops talking about marriage and children, and she has now got used to the idea. The wedding is likely to take place next year,” a friend of Cressida told The Telegraph.

Prince Harry expressed his desire for children and ‘settling down’ in an interview with Katie Couric. After some convincing he may finally succeed in getting Cressida Bonas to commit. However, the young socialite has reportedly struggled with the idea of settling down.

“Cressida has been in floods of tears,” her friend told The Telegraph,” Harry is coming on very strong, but she is all over the place. She thinks she is far too young to get married and is scared by all his talk of marriage and settling down.”

Cressida Bonas may fit in well with the royal family. After all ‘Cressie’ is no stranger to royalty. Her mother Lady Mary-Gaye Georgiana Lorna Curzon is the daughter of the 6th Earl Howe, godson of King Edward II. She is also the heir to the Curzon banking fortune.

According to rumors and speculation the world’s most eligible bachelor and the free-spirited socialite will wed. The public will wait with bated breath to see if Prince Harry and Cressida Bonas will actually tie the knot.