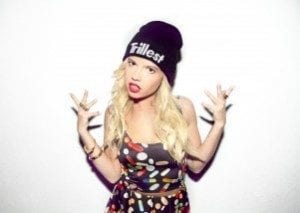 Chanel West Coast talks about her career, music, and her personal life.

Chanel West Coast, born Chelsea “Chanel” Dudley, is a popular TV personality and rapper. She is best known for her appearances in Rob Dyrdeks Fantasy Factory and Ridiculousness. She has also appeared on Nick Cannon Presents: Wild n’ Out and voices a character on Wild Grinders. Chanel has also appeared in Maxim magazine.

She has also been an aspiring rapper for a lot of her life and has pursued her dream, making it a reality. Chanel signed with Lil Wayne’s popular rap label, Young Money Records, in 2012 and has been working hard on her music ever since. Chanel went on tour in 2013 and has been working on her first album with Young Money that will debut in December of this year.

College News talked to Chanel about her music and personal life.

CN: Are you planning on continuing to star on Fantasy Factory and Ridiculousness?

CWC: Yes definitely, I plan to stay on the show for as long as I can balance doing both of them.

CN: Have you always wanted to be a rapper?

CWC: Yes, I mean since I was a little girl I have always wanted to do music first and foremost. Not necessarily rapping, rapping is something I started doing when I was like about twelve years old but um once I started rapping ever since I started that’s pretty much what I had my mind set on so yeah I have been wanting to do music my whole life basically.

CN: Who is your favorite artist to work with?

CN: What is your favorite part of performing and being on tour?

CWC: My favorite part of performing is seeing people in the crowd singing my lyrics, um that’s a really cool feeling. Actually I have been performing all my life, since I was a little girl in hip-hop dancing, drill team, cheerleading. I was in several talent shows and competitions growing up, so I’ve always loved performing and it’s a lot when you’re performing and you see people singing your lyrics as opposed to just watching you dance to a song. So that’s really the best feeling for me. Seeing people singing along to my lyrics and just really appreciating my music and just being fans. You know to see that, that’s the best most rewarding feeling.

CN: Who is your role model, or idol, in music and why?

CWC: I would say that I have two main role models as far as music goes. As far as rapping, Tupac was my biggest inspiration, that’s the artist that I listened to that really inspired me to start rapping. And as far as a female icon that I have always looked up to since I was a little girl is definitely Gwen Stefani. I think that is pretty much my biggest idol, I’ve always looked up to her since she was in No Doubt and then when she went on to being a solo artist doing kind of like more hip-hop music. I just think that she has such a unique style and theres really nobody like her and that’s one of the main reasons I idolize Gwen Stefani.

CN: Who is your fashion icon?

CWC: Fashion icon is also Gwen Stefani. I think that she’s just really different and I think that, you know no matter what she wears, it’s still her. It’s really like she’s got her own thing you know what I mean? I wanna be the same way as an artist, I want to have that style where like no matter what I wear you kind of see me and you’re like oh, that’s Chanel West Coast.

CN: Do you have any current love interests?

CN: What do you do beside music and working on Fantasy Factory and Ridiculousness?

CWC: Man, to be completely honest, my life is music and my TV shows. For the past five years that has pretty much been my life. You know when I do get down time I like to just, you know, do stuff like kick it with my friends. I am a Cali girl, I love to go to Venice beach and go to the beach with my girls. I obviously love to shop, go to Melrose and Rodeo stuff like that. So when I do get down time I like to do stuff like that. But I would say for the most part, my life is pretty much music.

CWC: In five or ten years I would really like to see myself as a successful music artist, you know, maybe at that point I got a few albums out that have done really well, won a few awards. I would also like to get into the film world. I would like to start getting into acting, eventually maybe even getting into producing because I have a lot of cool ideas for movies and stuff. So that’s another thing I would really like to get into after my music career takes off.

CN: What do you want to say to your fans and all those people who have supported you?

CWC: Oh man, I just want to tell my fans that I love them. Honestly I don’t know where I would be without my fans. It’s like if I have a bad day I go on Twitter and see a fan say something sweet to me and make nice compliments about my music or my laugh. And that can totally change your mood and cheer you up. So my fans are everything to me and I love them.

Chanel is getting ready for the drop of her new album and the continuation of the shows that she stars in. For more new music from Chanel you can check out new content she releases every week for #WestCoastWednesday on her social media.

Previous ArticleEpic Proportions Tour brings you along for the rockstar experienceNext ArticleBooks: The Gift You Open Again and Again