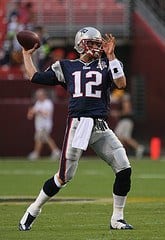 Tom Brady continues to play a central role in the New England Patriot’s success on the field—but few people expected him to help his team like this.

Brady signed a three-year contract extension on Monday that pays him $27 million overall, a shockingly low sum that represents about half of Brady’s market value. The upside for the Patriots, besides keeping Brady for an extra three years, is that they now have $15 million in cap space that they didn’t have last weekend.

The deal was actually a restructuring of his previous contract, which ran through 2015 and paid Brady $72 million; the new deal runs through 2017 (at which point Brady will be 40) and includes a $30 million signing bonus spread over 5 years and the following pay scale, according to Sports Illustrated:

Those numbers include base salary plus signing and workout bonuses.

Brady has expressed the desire to retire as a Patriot, and this deal gives him the opportunity to do so while giving his team the salary flexibility to sign impact players in free agency this summer.

The low price of his contract came as a surprise, but Brady had hinted previously that he would be willing to take less money in a deal.

“To be the highest-paid, or anything like that, is not going to make me feel any better,” said Brady in 2005.”That’s not what makes me happy. In this game, the more one player gets, the more he takes away from what others can get. Is it going to make me feel any better to make an extra million, which, after taxes, is about $500,000? That million might be more important to the team.”

Tom Brady was the leader of the NFL’s best offense last season; the team also set an NFL record for fastest pace. Brady threw 34 touchdowns against only eight interceptions as his team racked up a 12-4 record after a slow start.