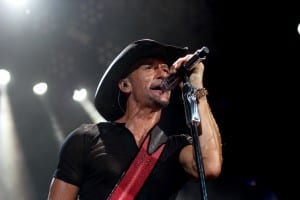 “This album is very encompassing of everything that I’ve done in my career,” says McGraw. “I think it’s a good microcosm of what my 20 or so years in music have been, in a lot of ways. You can certainly hear parts of my career throughout all of these songs, as well as the future and where my music is headed. To me, the title of the album is all about that time where you stop doing what you have to do, and start doing what you want to do.”

The album features 13 tracks and was co-produced by McGraw alongside Byron Gallimore. A deluxe version of the album will also be available and will feature 5 additional tracks.

Several songs from the album have already been introduced to fans, including “Shotgun Rider,” “City Lights,” Overrated,” and McGraw’s latest hit single, “Meanwhile Back at Mama’s” which features wife Faith Hill.

McGraw explains that the release of his new album comes so soon because he feels like “he’s got a lot of music” inside of him.

It’s no doubt that the highly anticipated album will spawn a huge response from country music fans with many hits expected to rock the charts.

Other collaborations on the album include Kid Rock and Catherine Dunn.