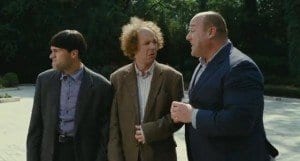 The trailer for “The Three Stooges” has hit YouTube and, so far, the trailer is receiving mixed reviews.

The modern film adaptation of the classic comedy troupe the Three Stooges stars Sean Hayes, Will Sasso and Chris Diamantopoulos as the lead roles. It’s penned by the Farrelly brothers, who had originally planned on having Sean Penn, Benicio Del Toro and Jim Carrey in the leads.

The official YouTube synopsis for “The Three Stooges” reads, “Left on a nun’s doorstep, Larry, Curly and Moe grow up finger-poking, nyuk-nyuking and woo-woo-wooing their way to uncharted levels of knuckleheaded misadventure. Out to save their childhood home, only The Three Stooges could become embroiled in an oddball murder plot…while also stumbling into starring in a phenomenally successful TV reality show.”

So far, the trailer is nearly evenly split between likes and dislikes. You can watch the “Three Stooges” trailer below.