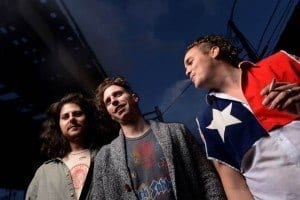 Bloodshot Records is excited to announce that Denver shitstarters The Yawpers have joined our roster of artists. The band’s forthcoming album will be released in the fall of 2015.

We’ve had our collective eye on these fellas for a while, after getting our grubby little hands on the recordings that will soon be their Bloodshot debut release, in addition to seeing the amazing video for their song “Silicone Love” on YouTube. Trust us; just watch it. (Spoiler alert: ROLLERBLADES! FIREARMS! GASOLINE!)

After missed opportunities to see the band play in Chicago, we finally got a chance to catch them outside a dingy punk club in east Austin at this year’s SXSW. The band took the stage in front of a sparse, meandering, slightly day-drunk crowd on an outdoor stage during the thick of the festival, conditions that would typically chew up and spit out most burgeoning outfits and have them swear they’d never play the Austin event again. But by the end of The Yawpers’ brief set – brimming with brutal and deeply soulful bottleneck slide guitar tones from Jesse Parmet, the stylistic and outright drum kit pummeling from Noah Shomberg, and lead man Nate Cook’s irreverent effervescence and searing vocal melodies – the crowd was packed with folks who were rejuvenated, dancing, and all in (seriously, there was a woman up front who was dancing so hard that her clothes were falling off). And we were all in, too.

The Yawpers craft tunes that are engrossed in creative context. Some might recall edges of the mid-1900s Delta blues, but only if those lived-in riffs were played by the MC5, broadcast through booming stadium speakers and drenched with pounds of fuzzy distortion and full-throttled punk rock energy. For what it’s worth, a friend at their aforementioned SXSW show called them “a bluesy Melvins.” They conduct parallel frequencies with the ferocious and raw proletarian roots of Uncle Tupelo, the burning-hot thrashings and cavernous sonic space of Hot Snakes, and mix in derisive scrutiny that brings to mind Ween or the Minutemen (and might we add that Cook is the spitting image of D. Boon).