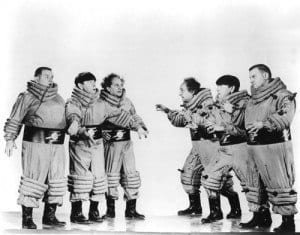 The Three Stooges have also ruffled the feathers of the religious kind due to Kate Upton’s “nun-kini.” Bill Donohue, president of the Catholic League made as statement about the new Three Stooges movie, “In the 1950s, Hollywood generally avoided crude fare and was respectful of religion. Today it specializes in crudity and trashes Christianity, especially Catholicism. Enter The Three Stooges. The movie is not just another remake: It is a cultural marker of sociological significance, and what it says about the way we’ve changed is not encouraging.”

A Fox spokesperson disagrees with Donohue, and says the remake of The Three Stooges keeps close to its roots as “a broad, slapstick comedy.” They said, “As the Stooges have proved over time, laughter is a universal medicine. The nuns that Mr. Donohue alludes to, are in fact, caring, heroic characters in the movie, albeit within the framework of a very broad comedy. And as far as the nun attire, I think we did the audience a favor by letting Kate Upton wear the nun-kini rather than Larry David – it could have gone either way. We invite you to see the movie and decide for yourselves.”

A film review from The Hollywood Reporter gives The Three Stooges positive feedback. The review comments the actors as they “are entirely on the money as Moe, Curly and Larry, respectively, nailing the voices, carrying off the essential familiar moves with aplomb and, in Hayes’ case, even bringing a little something extra to the least-defined Stooge.” The review continued, “Gestating for so long it nearly qualifies as a dream project finally come to fruition, this boisterous and affectionate comedy has more plot and sentiment than the boys’ shorts ever had in their ’30s-’40s heyday, but the winning cast and sympathetic spirit almost immediately strip away any skepticism long-term hardcore fans might carry in with them.”

The Three Stooges is now in theaters.