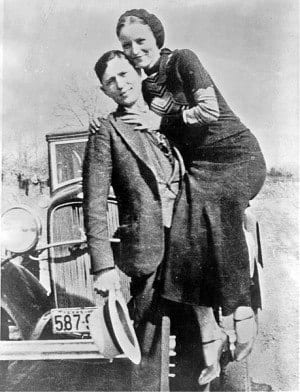 The auction is September 30

According to an auction official that talked to CNN today, two guns recovered from the bodies of the infamous gangster couple, Bonnie and Clyde, are expected to go for more than $100,000 each.

Found around the waistband of Clyde Barrow, the Colt .45 of Bonnie and Clyde is one of the collectables that will be auctioned off. The other gun that will sell anywhere between $100,000 and $200,000 was a .38 caliber Colt that was found strapped to one of Bonnie Parker’s legs. Both guns were found on May 23, 1934, when Bonnie and Clyde were killed in an ambush near Gibsland, Louisiana.

“This is one of the finest Bonnie and Clyde collections you will ever see,” vice president of RR Auction in Amherst, New Hampshire, Bobby Livingston said. “We expect the guns should sell anywhere between $100,000 and $200,000. But really, the sky is the limit for these types of guns.”

According to RR Auction, the Colt .45 that was found around the waistband of Clyde, was his “personal pistol.” When the car that Bonnie and Clyde was driving was searched by the police, weapons were found, including nine other guns; however, this particular Colt was favored by Bonnie and Clyde.

Being auctioned off with the guns is an extra clip for bullets, along with a letter from the son of one of the Texas Rangers who killed Bonnie and Clyde, Frank Hamer Jr.

Within Hamer’s letter, he states, “My father said that one reason she [Bonnie] had the gun taped to the inside of her leg was that, in those days, no gentlemen officer would search a women where she had it taped.”

The auction that will be selling the guns of Bonnie and Clyde will be held September 30, and will have more than 100 lots of gangster-related items.