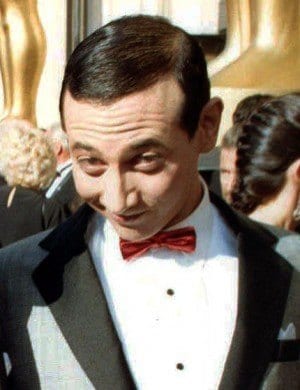 Pee-wee Herman finally hit rock bottom. Well, not literally, but he did finally made it to the bottom of the Alamo. Pee-wee, comedian Paul Reubens, spent the majority of his 80s classic film “Pee-wee Herman’s Big Adventure” trying to find his beloved red Schwinn bicycle, which he though was hidden in the Alamo’s basement.

Aptly, with his recent guest appearance on Wednesday night’s “Top Chef: Texas,” Pee-wee Herman, with his famous bicycle in toe, the quirky, red-bowtie-wearing funny man finally found the Alamo’s basement, or at least toured the basement of the Alamo Sales Museum, according to the Los Angeles Times.

Pee-wee appeared on the hit Bravo cooking show as a guest judge. The show’s five remaining chefs had 20 minutes to make pancakes, which as any fan of the show “Pee-wee Playhouse”  knows was, and apparently still is, Pee-wee’s favorite food.