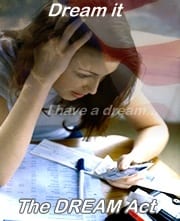 Through educational pursuit, 1.7 million undocumented immigrants are given the chance at American citizenship.

The DREAM Act, which will provide immigrants ages 15 to 31 with temporary residency in the United States without fear of deportation, has many immigrant parents looking out for the future of their children.

An acronym for Development, Relief, and Education for Alien Minors, the DREAM Act comes with a checklist of conditions that would determine a candidate’s eligibility for qualifying for the 2001 Senate-proposed bill.

First and foremost, the candidates applying must have proof of arriving in the U.S. before the age of 16. Along with that, candidates must also have proof of their residence in the U.S. at least five years since the date of their arrival and be between the ages of 12 and 35 at the time of the DREAM Act’s enactment. A mouthful, but these are just the preliminaries.

In order for candidates to qualify under the DREAM Act, they must have graduated from an American high school, obtained a GED or been admitted to a college or university. And if that is not enough, the candidates in question must also have kept their noses clean and have what the bill refers to as a “good moral character.” That means no felonies or misdemeanors on the individual’s record will be tolerated when under consideration for DREAM Act aid.

Other requirements include two years U.S. military service, or two years at a 4-year institution of collegiate-level learning. If the candidate has met these requirements then he/she can obtain temporary residency for a 6-year period, within which candidates can qualify for permanent U.S. residency, that is, if they have acquired an American college degree or have served two years military service and received an honorable discharge.

Though there are a multitude of specifications to be met under the DREAM Act, many immigrants see the bill’s passing as a defining moment for their children’s future and have been scrambling for the necessary paperwork. Documents such as tax receipts, bank records and religious records can provide proof of U.S. residency for immigrants trying to qualify and receive aid.

So far, parent determination has been unwavering.

Beginning Tuesday night at 11pm, hundreds of people lined up for the DREAM Act’s relief program at Navy Pier even though the program’s first workshop did not begin until 9am Wednesday. Nearly 5,000 people have signed up for the workshop which aims to assist candidates in filling out the proper applications and provide information regarding the program that affects 7,500 Illinois residents. Parents and children waited with a concert ticket-like dedication with hopes for their children’s success in admission to the program.

America, the land of opportunity. It has been the age-old ideal of our fair nation since the Puritan exodus to escape persecution for their religious beliefs. And then, of course, there was Independence, which allowed this idea of “America the free” to truly blossom.

The DREAM Act reinforces these very American beliefs by giving everyone an equal opportunity to live, learn and succeed. In this economy where finding a job is as tiring as treading deep water, an education serves as the lifesaver keeping many afloat. After all, we are all immigrants in one way or another. We should all have a fair chance.