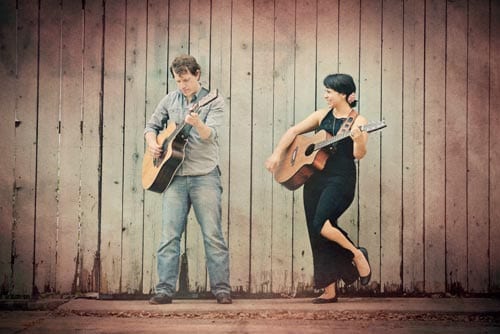 Darling duo, The Traveling Ones, are emerging in the Texas music scene with their earthy, organic sound. Bound to win hearts on their tour this year, The Traveling Ones are promoting their debut album “Meet Me There” which was released on February 3rd. Emily and Justin gave a little time to College News to talk memories, inspiration and future plans.

College News: Firstly (a generic one!) tell us the story of how you both met.
Emily: Justin and I met at an open mic in Austin called House Wine. I hadn’t been out to play in a while and decided it was time to go out and meet some new people. As I walked in, there were two guys jamming before things got started, so I asked if I could sit with them. They said of course and so I sat down to listen. Justin was hanging out across the table, playing rhythm, while this other dude was trying to solo. I say trying to solo, because he was awful, and kept giving me the eye that said, “Look how awesome I am, baby,” raising his eyebrows and everything. All I could think about was how terrible he was and how he was giving me the creeps. Justin always says at that point, he saw my reaction, and decided to sit back, because that guy was gunna make him look really good. His plan worked too. The other guy left before the open mic even started, which we thought was funny, and immediately started laughing about it. I can’t even remember exactly what we talked about, all I know is that we were cracking jokes the whole time. I also remember going to work the next day, and couldn’t wait to tell my friends how I might have met someone special. Turns out I was right!

“I also remember going to work the next day, and couldn’t wait to tell my friends how I might have met someone special. Turns out I was right”—Emily on meeting Justin

CN: Your sound has been described as earthy—where does your inspiration for your unique sound come from?
Emily: I think a lot of our influences, have a pretty natural sound, which we draw from. I always say that simplicity is underrated, because there is so much beauty in the simple things. That comes through in our music by letting lyrics and instruments speak for themselves.

CN: Tell us about your writing process?
Justin: For this album, Emily and I were learning how to write together. In the beginning, one of us would bring a mostly finished song to the table and we’d polish it off together. But by the end of the album we were co-writing entire songs. One of us would have some kind of inspiration or idea for a song and we’d sit down and write it out together. “Red Lights” was written this way and we both feel it’s our best song on the album.

CN: Tell us about The Traveling One’s debut album—what can our readers expect from this?
Justin: The album is called “Meet Me There” and it’s about the unexpected nature of life. Emily and I drew heavily from our personal experiences for this one and I think that really comes through. They say “write what you know” and we did just that. These songs are very honest and the melodies are simplistic and raw. You’ll also hear a variety of different genres on the album. I think that’s a testament to our combined musical backgrounds as well as the fact that, at this point, we’re still figuring out our sound.

You might also enjoy: Interview with Punk Rock Duo 18th and Addison

CN: What do The Traveling Ones have in store for 2017?
Emily: Well besides releasing our first album, on Feb. 3rd, we’ll be doing a regional tour around Texas including Dallas, Ft Worth, Houston, and San Antonio. After we finish our tour, we’ll be looking towards SXSW, and showcases that go along with that. We’re also excited that we will have a “Hear Texas Here”” listening station and window banner up at Waterloo Records for the month of March. After some of the Spring madness subsides we’ll be playing some festivals during summer.
We’re hoping to follow that with a fall tour, and look into what radio promotion is all about. We’ve got a lot of plans, but we’re hungry for 2017!

CN: What’s your favorite memory from a show?
Emily: There have been a few for sure, one of them is from a show we played at Lambert’s, and it was some guys 60th birthday. He was dancing with all the ladies all night! It’s always fun to see people get on their feet and dance.

CN: If you could collaborate with any other artist, who would it be and why?
Justin: We’d both LOVE to collaborate with the Tedeschi Trucks Band. Frankly, we’d settle for sitting in a room with them as we decide to quit music all together! On a more serious note, their songs are just so organic sounding. It would be incredible to tap into that process and push our own abilities. Their definitely our vote for best band around.

CN: Do you have any fun facts to share with us?
Justin: Emily is actually a fantastic chef. She makes all the hand-made pasta for the corporate kitchen at the Apple Campus in Austin. If we weren’t doing this, we’d probably be opening a restaurant or bed & breakfast or something. Thank God for music!

Check out the Traveling Ones’ tour schedule, here.