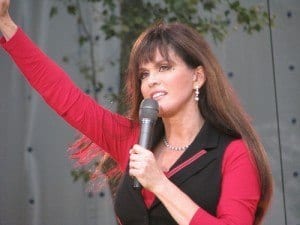 Marie Osmond tweets about her condition

Marie Osmond was sent to the hospital on Wednesday with a nasty case of bronchitis.

Osmond tweeted about her condition, saying that her voice faltered mid-performance.

“So the allergies went into a bronchitis. Didn’t realize it until I went to hit the high notes last night on stage. Pie Jesu was kinda P-U,” Osmond tweeted.

After being hospitalized for a few hours, Osmond returned home, feeling noticeably better.

“Getting ready to go to the show. Big doll event tonight. Nothing could make me miss this,” she tweeted, adding, “My cute hubby just made me an awesome steak on the grill. So now I’ve had protein and feeling strong.”