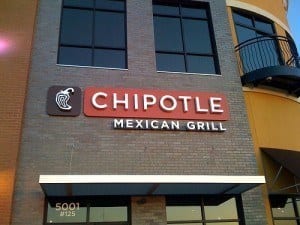 Chipotle rounds off pennies in busy locations to save time, but its policy confuses customers

Chipotle locations in busy areas, like New York and New Jersey, have started rounding off checks to the nearest nickel to save time—the less time cashiers spend counting out pennies, the more people get through the line.

The only problem is when Chipotle rounds up.

The restaurant chain did away with pennies by rounding checks up or down to the nearest five-cent mark, which was done automatically by the cash register. But that meant that someone with a final bill of $6.39, for example, would end up paying an extra penny to round up to $6.40. Someone with a bill of $7.02, however, would only pay $7.00.

But, of course, the customers paying extra thought Chipotle was cheating. Last week, the (N.J.) Star-Ledger investigated Chipotle’s rounding practices after one customer, Jayson Greenberg, sent his receipts to the paper. Chipotle spokesman Chris Arnold said the entire motive for rounding was to save time, and the restaurant chain has not gained any profit from the practice.

“It was never our intention to have a policy that was confusing or misleading,” Arnold said. He denied that Chipotle was cheating its customers.

To curb talk of cheating, Chipotle has instituted a new policy in New Jersey: to only round down, in the consumer’s favor. The policy went into effect Aug. 1. Chipotle has also added a rounding line to its receipts so customers know exactly where their precious pennies are going.