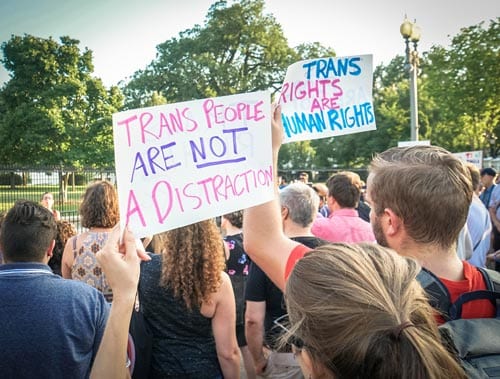 The banning of transgender people in the American military has once again put Trump in the firing line for his dubious policies.

Donald Trump has been known to lie. Point in fact. But as more Trump scandals begin to unfold and as the shadow of his lies grow over his administration, Trump finds himself the center of further backlash.

Trump’s tweets on Wednesday afternoon declared that “After consultation with my Generals and military experts, please be advised that the United States Government will not accept or allow…. Transgender individuals to serve in any capacity in the U.S. Military. Our military must be focused on decisive and overwhelming… victory and cannot be burdened with the tremendous medical costs and disruption that transgender in the military would entail. Thank you”.

Needless to say, few thanked him back.

In a time where countries across the globe have lifted restrictions on the LGBTQ community, including Angela Merkel—the German Chancellor—who, despite her own personal views, has acknowledged the movement the world is undergoing and accepted the democratic decision of her country. Trump however seems keen to ignore the forward momentum America once had—was there still prejudice? yes, of course; the Orlando shooting was proof of that. The support for the victims was immense and the stand of government officials around the country made against this shooting was profound.

A mass outcry has been caused by Trump’s latest policy change in the banning of transgender people in the American military due to his beliefs that the “overwhelming medical costs” and “disruptions that the transgender military would entail.” Beyond the fact Trump still can’t write well-formulated sentences, this kind of action creates a stigma between the right to serve and the right to be free to choose your gender identity.  Such a notion may fly free with the president’s supporters who likely joined the Trump bandwagon hoping for such ideas to be passed. But as to how it represents America as a whole; a culture that has pushed for a more equal, embracing country is now being setback thanks to the ideological beliefs of a hypocrite.

Further to Trump’s tweets banning transgender people in the American military, Wednesday also saw The Department of Justice (DOJ) state that the landmark Civil Rights Act of 1964 offers no protection from discrimination based on sexual orientation. DOJ lawyers, arguing under Attorney General Jeff Sessions, submitted the brief to the US Court of Appeals in which they said the department did not believe the law—which bans discrimination based on race, color, religion, sex or national origin—applied to lesbian and gay people.

LGBTQ advocacy groups swiftly objected to such a stance, having already had to make a strong objection to Trump’s tweets on the same day. The American Civil Liberties Union called the DOJ’s position “one more gratuitous and extraordinary attack on LGBT people’s civil rights,” and said it would defend Americans’ rights in the courts.

Why are such policies being both suggested and passed? Is this really just Trump and his administration’s mind-set in general or is there an articulated plan? One theory suggests that Trump’s overall goal is to undo most of the policies Obama put in place—including allowing transgender American’s to join military service. Trump has been open about his intentions to repeal and replace Obama Care and has been fighting to get such an action in place since the start of his term as president. But is that enough? Is simply undoing a presidency he views to be backwards enough to justify setting the rights and lives of actual Americans back?

The answer to the above is clearly no; Trump’s justifications thus far seem weak at best. The Washington Post was quick to point out that the US military spends almost $42 million a year on the erectile dysfunction medication Viagra—several times the total projected cost of transgender medical support. There has yet to be a clear statement beyond Trump’s tweets to what this new “ban” may entail and how it’s going to be put in motion. Big ideas however can still provoke reactions: the very fact a sitting president can declare such motions seemingly so flippantly is easy to provoke his supporters to incite hate crime—much in the same way it did when Trump first declared his travel ban.

Sergeant Ken Ochoa, a transgender serving American man said, “It was heart-breaking, my stomach dropped” upon seeing Trump’s tweets but noted, “I don’t even know if I can [continue serving]… It just seems like chaos, so many unknowns.” The Department of Defense has referred all questions on the banning of transgender people in the American military to The White House stating new information will be available soon. As of yet, press secretary Sarah Huckabee Sanders has yet to make a statement—instead saying “I would imagine the Department of Defense will be the lead on that”.

Trump’s stance during his campaign outwardly portrayed him in favor of supporting the LGBTQ people of America.  Such actions seem to once again suggest Trump was lying or he has just forgotten what the T stands for. Trump has seemingly overlooked—or does simply not understand—the bravery that’s not only required to enlist and to “come out” and outwardly express the gender that transgender people identify with. The combination of these two elements is surely exactly the kind of attributes that should be in the armed services. But then, this is nothing new for Trump; he chooses power of bravery—favoring being the loudest voice rather the logical voice. Trans men and women have the right to choose to fight for their country and themselves everyday—Trump however chooses to demonize those who make choices far more courageous than he could ever even contemplate. The true mark of a coward is someone who belittles and represses that which he does not understand—a statement that could be put to almost any of Trump’s policies and views.

America cannot be seen as Great Again when it’s leader is controlled by a fear of progression.

Let College News know your thoughts on the banning of transgender people in the American military.

Further reading: Transgender Americans Will No Longer Be Allowed to Serve in the Military