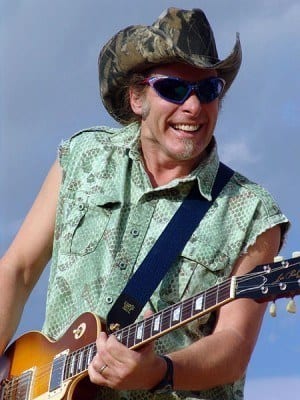 Compares himself to “Black Jew at a Nazi-Klan rally”

Ted Nugent, rock guitarist, NRA board member and Mitt Romeny supporter, said he stands behind his rant against the Obama administration at last week’s National Rifle Association convention, despite pressure from Democrats to apologize and an investigation by the Secret Service.

In an appearance at the NRA’s annual conference in St. Louis on Saturday, Ted Nugent slammed the Obama administration. “If you want more of those kinds of evil anti-American people in the Supreme Court, then don’t get involved and let Obama take office again,” Nugent said Saturday. “Because I’ll tell you this right now: If Barack Obama becomes the president in November again, I will either be dead or in jail by this time next year.”

On Monday night, Debbie Wasserman Schultz, the Democratic national chairwoman, called on Mr. Romney to “condemn Nugent’s violent and hateful rhetoric immediately,” adding that “it has no place in our political discourse or this campaign.”

The Romney campaign responded with a general statement Tuesday. “Divisive language is offensive not matter what side of the political aisle it comes from,” said spokeswoman Andrea Saul, adding that “Mitt Romney believes everyone needs to be civil.”

He went on to say that he stands by his speech at the NRA rally. “It’s about we the people taking back our American dream from the corrupt monsters in the federal government under this administration, the communist czars he has appointed.”

In a press briefing on Tuesday, Jay Carney, the White House spokesman, refused to directly address Ted Nugent’s comments, saying, “We can’t be policing the statements of supporters across the board. The president is focused on the issues.”

The Secret Service told ABC News it is aware of the comments made by Ted Nugent and is conducting “the appropriate follow-up” given the vaguely threatening nature of the remarks.