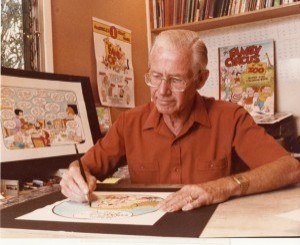 Iconic cartoonist Bil Keane has died at the age of 89.

Daily Cartoonist details that Keane was a self-taught artist. He gained acclaim for his comic panel “Family Circus,” which premiered in 1960. It is one of the most widely syndicated comic strips.

Keane worked as a staff artist at the Philadelphia Bulletin for 15 years and created the syndicated comic “Channel Chuckles” in 1954 prior to finding success with “Family Circus.”

Keane was named NCS’ comic of the year in 1983. Keane’s son, Jeff, will continue to work on the cartoon.