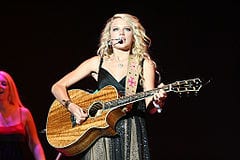 Country singer wins artist of the year for second time

While the singer-songwriter tied Adele with three wins, she stole the night after she beat Adele, Lady GaGa, Katy Perry and Lil Wayne for artist of the year, the award show’s highest accolade.

The 21-year-old country superstar previously won the award in 2009. Swift received trophies Sunday for favorite country female artist and favorite country album for “Speak Now.” “This is so crazy,” she said.

Adele had been the night’s expected favorite, leading with four nominations. She grabbed three awards, favorite pop/rock female artist, adult contemporary artist and pop/rock album for “21.” The British singer was absent from the show because she is recovering from recent throat surgery.