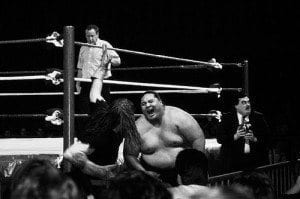 Paul Bearer, real name William Moody, 58, died March 5 in Mobile, Ala., according to close friend Cowboy Bob Kelly. Moody was best known for his role as the Undertaker’s manager, in the world of professional wrestling.

Moody went by Paul Bearer (as in pallbearer), carried around an urn supposedly filled with ashes that had magical powers that would help the Undertaker win matches as Paul Bearer rubbed it. He dyed his hair, eyebrows and moustache black and wore white face makeup.

The theatrical relationship between Paul Bearer and the Undertaker involved staged fallouts, the fictional creation of Paul Bearer’s illegitimate son, Kane, who was also the Undertaker’s secret half-brother and pay-per-view televised “casket matches.”

In real life, Moody had a degree in mortuary science and had worked in the funeral industry. Moody was born April 10, 1954 in Mobile. His wife, Diana, died in 2009. His sons D.J. and Michael survive him.

Kelly said Moody’s interest in professional wrestling started in the 1970s when he attended Kelly’s matches and occasionally took press photos for the Press-Register in Mobile.

Paul Bearer was Moody’s most well-known character, but friends would refer to him as Percy, short for his previous role as Percival Pringle III in the 1970s and ’80s, according to Kelly.

WWE is receiving some criticism for using Paul Bearer’s death as a marketing ploy in real life. On the most recent episode of “WWE Monday Night Raw,” the Undertaker kneeled before Paul Bearer’s urn as a sign of respect directly before CM Punk came out to offer his condolences to the Undertaker at Wrestlemania.