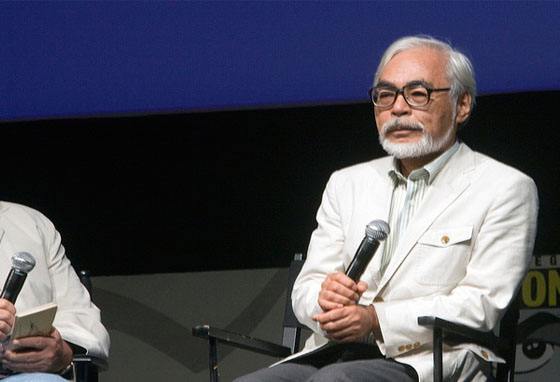 Studio Ghibli’s Hayao Miyazak is a master storyteller. Miyazaki is a Japanese film director who also acts as a producer, a screenwriter, an author, a manga artist and an animator. He has been crafting masterwork movies for five decades and has invited such international acclaim that his name resides on the director’s podium of prestige along with Walt Disney and Steven Spielberg.

Miyazaki was born in Tokyo in 1941 and began his illustrious career in animation in 1963, not a moment too soon, joining the ranks of those producing work for Toei Animation. After the fantastic success of his second film in 1984, Nausicaä of the Valley of the Wind,  Hayao Miyazaki would go on to co-found Studio Ghibli with Isao Takahata. With the release of Princess Mononoke in 1997 by Miramax Films, Miyazaki became critically acclaimed in the west as well as in Japan. His next film, Spirited Away, was the first anime film to ever win an American Academy Award, and it additionally won Picture of the Year at the Japanese Academy Awards.

You can know all the details about Hayao Miyazaki’s life, but you won’t ever quite understand Miyazaki until you experience one of his movies. Each movie is a gem in the dark caverns of the modern media landscape. Regardless of whether or not you approach Miyazaki’s works with a preconceived appreciation for anime, you will walk away with a sudden love and passion for the genre. Miyazaki works magic, bringing deceptively simple lines to life with such an incredible amount of character, style, and level of reality that you exist, for the duration of his movies, in another world foreign to your own.

Miyazaki’s movies all contain his trademark thematic elements that distinctly represent his innermost contemplations of the world. Most often primary characters are ordinary young men and women who are faced with extraordinary tasks, and who triumph and persevere through bravery, honesty, and love. Miyazaki weaves fascinating stories where enemies transform into friends and friends have tinges of realistic uncertainty and deceit.

He also has a tremendous grasp on the tender years of childhood, and often uses this delicate understanding to convey important themes through relatable and heartwarming children characters. Mystery, adventure, romance, and friendship are melded together into fascinating blends of fantasy and normalcy. And the artwork? Breathtaking. Every scene from a Hayao Miyazaki movie could easily serve as a poster on your wall, bringing out the nostalgia of having experienced the movie and taking you back to its world for just the brief moment that you pause to take it in.

Convinced that you need to see a Miyazaki classic yet? If not, do it anyway. You may find yourself suddenly in raptures over Miyazaki’s infinite wisdom and skill in storytelling and moviemaking without ever really realizing how you got there. The following are popular Miyazaki movies that can be easily dug up and enjoyed, in no particular order of preference.

You see you have some work to do. There is so much to enjoy, and those who have already watched Miyazaki’s films know the envy of seeing someone else experience them for the first time. Hayao Miyazaki finished his career with The Wind Rises, and has left behind a bittersweet legacy of awe-inspiring films bursting with intelligence, creativity, and heart which will, undoubtedly, withstand the test of time.

You should also read: The Tale of Princess Kaguya movie review