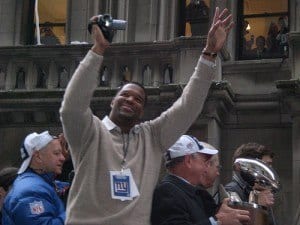 Michael Strahan has been chosen as Kelly Ripa’s new co-host for her morning talk show “Live! With Kelly,” replacing longtime host Regis Philbin. The news about Philbin’s replacement was supposed to be kept under wraps until Sept. 4, but knowing the omniscient powers of the Internet, it was only a matter of time until the surprise leaked.

Strahan, a former NFL defensive end and Super Bowl XLII champion, has served as a guest host on “Live! With Kelly” in the past. Formerly one of the 59 guest hosts brought on by Ripa in Philbin’s absence, Strahan’s position as co-host looks to be permanent.

“Live! With Kelly” is the latest benchmark for Strahan, who after his football career turned to commentating, product endorsing (Subway) and sitcom star of the short-lived Fox program “Brothers.”

News of Strahan’s new gig surfaced after a representative of the retired NFL star was spotted Tuesday outside the talk show’s ABC building at 67th and Columbus in New York City. Wearing his satisfaction on his face, the representative was reported as grinning ear to ear by TMZ.

ABC said Monday that Ripa’s new co-host will be announced Sept. 4, in a surprise move in which her new partner’s identity will be revealed as he joins her onstage. But thanks to TMZ and the Internet’s viral grapevine, America can finally rest easy knowing that Kelly no longer has to fly solo.

Strahan, who stands in at 6’5’’ and 275lbs, should not find trouble in filling Regis’ shoes.