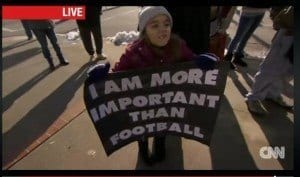 In what has been a long and grueling trial, for the Ohio town of Steubenville and for the victim’s family, two high school football players were convicted Sunday in an Ohio rape case that gained national media attention, according to CNN.

The two men who committed the crime, Trent Mays, 17, and Ma’lik Richmond, 16, were found guilty of raping a drunken 16-year-old girl.  The case has attracted the attention of bloggers—and even the hacking group, Anonymous.

Not only was one of the accused, Mays, convicted of rape under Ohio law, but he also was found guilty of disseminating a nude photo of a minor.  A flurry of text messages, videos and photos were spread across social networks following the rape.

According to CNN, Judge Thomas Lipps announced his decision after reviewing evidence that was presented over four days of testimony in the case against Mays and Richmond.  The two teens were tried as juveniles.

The victim did not appear in the courtroom, but her mother delivered a statement after the judge’s ruling.
“Human compassion is not taught by a teacher, a coach or a parent. It is a God-given gift instilled in all of us,” the victim’s mother said after court was adjourned. “You displayed not only a lack of this compassion, but a lack of any moral code.”
Mays was sentenced to a minimum of two years in a juvenile correction facility.  Richmond was sentenced to a minimum of one year, but he could serve until he is 21.  The Department of Youth Services will determine whether the boys will serve longer, according to CNN, dependent on their behavior and rehabilitation.
The two teens will register as sex offenders and are ordered to undergo treatment.  Lipps said he will postpone a hearing into which sexual offender registration category they will be classified until the end of their incarceration.
The case may well not be over.  Though it is unlikely others present at the party could be held legally responsible for the crime committed that night, investigators have identified a number of party attendees and have interviewed owners of a home where one of several parties took place that night.
Advocacy groups have called for additional charges in the case and for more people to be held legally responsible, according to ABC News.