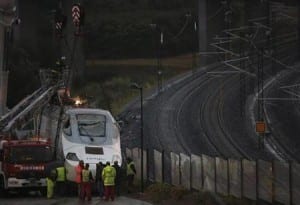 Is Francisco Garzon, the train driver, to blame?

You would think that after driving the same route on a train you’d have all the speeds down and know exactly when to go what speed. But apparently this is not the case for 52-year-old Francisco Garzon. Garzon was driving a train in Spain on Wednesday when it crashed because he was going double the speed he was supposed to.

Seventy-nine people were killed and dozens more were injured because of Garzon’s mistake.

Normally the train was supposed to slow down to 50 mph 2.5 miles before the sharp curve where the train crashed. But Garzon apparently didn’t remember to do so.

According to Spanish media he didn’t make any excuses as to why the crash occurred, he just said that he tried to brake but it was too late.

What the judicial system will try to find out is whether his distraction came from methods of communication, such as a cell phone. So they have confiscated Garzon’s phone and have been searching his texts, calls and social networking to see if that was what distracted him from his duties.

The train’s records will also be looked at to see what may have contributed to the crash, such as the lack of an automatic breaking system or other issues.

He was recorded after the crash expressing his regrets.

“Poor travelers,” he said in Spanish. “I hope there are no dead because they will fall on my conscience.”

Garzon will not be allowed to drive a train for the next six months after Judge Luis Alaez took away his license away.

The casualties of the crash included travelers from several other countries including the U.S., Puerto Rico and a few other European countries.