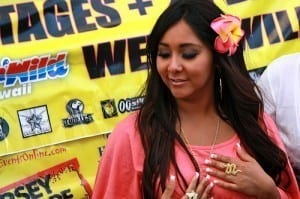 In a move to bring in absolutely zero new viewers, ABC has brought in a star-studded cast for its 17th season of “Dancing with the Stars.“

Reality Princess Nicole “Snooki” Polizzi, Bill Nye the Science Guy and Jack (Son of Ozzy) Osbourne are all set to appear on the September 16 premiere.

Dancing with the Stars executive producer Conrad Green boldly stated, “I feel like it’s one of the best fields we’ve had in years.” The rest of America collectively responded with, “no it isn’t.”

Executive producer Conrad Green went on to say, “every single person justifies their place.” By “justifies their place,” we can assume he is referring to the D-list celebrity doldrums that “Dancing with the Stars” has become; a collection of have-nots and Hollywood leftovers.

Upon ABC’s reveal of the Dancing with the Stars lineup, viewers responded enthusiastically with cries of “I don’t know any of these people,” and “Why am I watching this?”

Be sure to tune in on Sept 16 at 8/7 CT. Contact your local cable provider for more details.