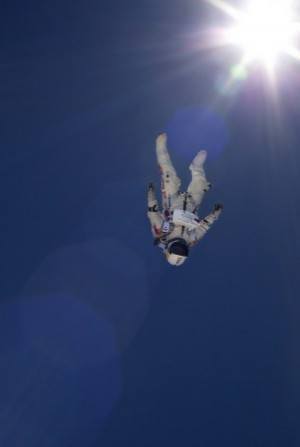 The 43-year-old daredevil fell more than 24 miles and 800 mph, faster than speed of sound

Felix Baumgartner, an Austrian skydiver, successfully broke the sound barrier yesterday, becoming the first human to do so in nothing but a well-designed spacesuit.

Felix Baumgartner’s space jump lasted more than four minutes as he fell from more than 24 miles above the ground, and he reached a maximum speed of 833.9 miles per hour — or Mach 1.24, faster than the speed of sound. He ascended via a helium balloon, and when doubts about his safety arose because his helmet was fogging during the ascent, Felix Baumgartner simply started making plans to make the jump blind. As he started tumbling in the thin air of the stratosphere, Baumgartner was able to smooth out his descent and land safely in the New Mexico desert.

“In that situation, when you spin around, it’s like hell and you don’t know if you can get out of that spin or not,” 43-year-old Baumgartner said. “Of course it was terrifying. I was fighting all the way down because I knew that there must be a moment where I can handle it.”

Besides the dangers of the fall itself, the Red Bull Stratos team—the project was funded by the energy drink company—had concerns about Baumgartner’s suit. “There are so many things that could go wrong here that we’re pushing the technical envelope,” said Dr. Jonathan Clark, the team’s medical director. If the suit had touched the ascent capsule during the jump, it would have torn and exposed Baumgartner to zero oxygen and temperatures of negative 70 degrees.

Joe Kittinger, who attempted to break the speed of sound in 1960 but only jumped from 19.5 miles up, was part of Felix Baumgartner’s team during the space jump. Kittinger talked Baumgartner through the ascent, giving him pep talks and assurances. Kittinger continues to hold the record for longest free fall, at five and a half minutes, even though Baumgartner shattered the records for height and max speed.

Baumgartner says it’s impossible to feel the sensation of traveling faster than the speed of sound because there are no reference points for such speed. He also could not hear the loud noise he made when he broke the sound barrier.

Previous ArticleArlen Specter dies of cancer at 82Next ArticleBad first date? There's an app for that