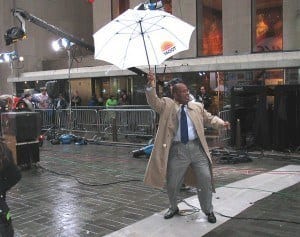 A staple of early morning television, Roker sleeps through the taping of his show

Al Roker spent the last 39 waking up for early morning tv shows. But all those early mornings finally caught u with him this morning.

Al Roker hosts his own show, “Wake Up With Al,” at 6 am on NBC. This morning Roker overslept and missed the filming of his own show.

Fortunately, Al Roker is a very good tv personality, so he laughed the whole incident off. He made it in time to co-host the “Today” show and get ribbed by his fellow co-hosts.

Matt Lauer tweeted “Rip Van Roker,” which many fans miss read as “RIP Al Roker.” Roker himself joked that they were going to change the show’s title to “Al, Wake Up.”

Oversleeping isn’t really a big deal. Everyone does at least once in their lives. (Many of us do it every time we have an 8 am class.) So it’s fair to give Al Roker a pass just this once.

He is going to be the butt of jokes for awhile. McDonald’s even used him to promote their McCafe. They tweeted “Stick with us @AlRoker, we’ll help you wake up for the next 39 years #McCafe” with a picture of their coffee.

And Al Roker isn’t the only person on the “Today” show who’s overslept this week. Willie Geist reportedly overslept on Monday. You’ll have to watch tomorrow and see who’ll be the next to oversleep.