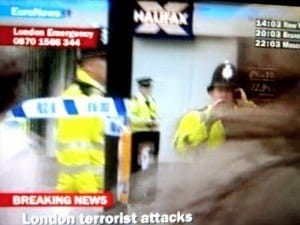 A London attack shocked the world on Wednesday with its brazen daylight execution. Two men hit another man with their car, then got out and started hacking at him with knives and meat cleavers.

The London attack took place near the Royal Artillery Barracks in Woolwich, and the man who was killed has been confirmed to be a soldier. His family has asked that his name not be released.

After the London attack, one of the suspects gave a statement to a bystander who was videotaping the scene. The graphic video shows the man’s hands covered in blood as he waved a knife and meat cleaver in the air. He claimed the attack was retaliation for attacks on Muslim countries by British soldiers.

“We swear by almighty Allah we will never stop fighting you. The only reason we have done this is because Muslims are dying every day,” he said. “This British soldier is an eye for an eye, a tooth for a tooth.”

The man in the video has been identified as British-born Michael Adebolajo. The 28-year-old Londoner converted to Islam during his time at the University of Greenwich. The other suspect in the London attack has not been identified.

In his justification for the London attack, Adebolajo seemed to regret the graphic nature of the attack.

The suspects were still at the scene when police arrived. Both were shot, and then transported to separate hospitals for treatment.

“We will never give in to terror or terrorism in any of its forms,” Cameron said.

Cameron also praised the heroics of one woman who confronted the men after the London attack. 48-year-old Cub Scout leader, Ingrid Loyau-Kennett jumped off a bus to attempt to calm the men down.

“I thought I had better start talking to him before he starts attacking somebody else. I thought these people usually have a message so I said ‘what do you want?’ said Loyau-Kennett.

The London attack appears to be a solo effort by the two men in custody. As of now, the men have no ties to al Qaeda. Their actions could have been sparked by listening to radical preachers and militant Islamic websites.

Anjem Choudary, a radical Islamic cleric, said that Adebolajo had attended some of his lectures in the past. Choudary has been known to speak out against British involvement in the Middle East. But he denies ever advocating violence on British soil, especially this London attack.

“My position is clear,” Choudary told The Independent. “There is a covenant which says that in return for Muslims being allowed to live peacefully and practice their faith in Britain, then it is forbidden to attack the British authorities, soldiers, in the UK.”

In response to the London attack, right-wing British extremist took to the streets on Wednesday. The protesters were from the English Defense League. Riot police contained the protesters.