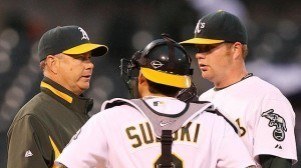 Former A’s pitching coach back after a season in Boston

After a year as Boston’s pitching coach, Curt Young rejoined the young A’s pitching staff on Friday, October 21, signing a one-year deal. The 2012 run will be Young’s 28th overall with the A’s organization.

“It’s exciting for me,” Young told the Oakland Athletics’ official website. “I get a chance to come back and be very comfortable, knowing the pitchers already, the front office, the coaching staff. It’s just exciting being able to come back.”

When it was announced that Terry Francona would not be returning to the Red Sox for the 2012 season, Young, like other Boston coaches, was given the opportunity to seek employment elsewhere.

“Obviously it was a fun year in Boston, but not finishing the way we wanted to finishI think has a lot to do with me being let go,” said Young.

Boston’s loss is a win for Oakland and especially for manager Bob Melvin who was given a 3-year contract at the end of this season. Young and Melvin were teammates on the Royals in 1992.

“He’s laid-back but very well respected,” Melvin said. “Just easy to work with, from what I’ve heard, and I know a lot of our guys like him very much. I’m excited about it. I think it’s a natural fit for many reasons — a history with the organization, a history with the pitchers, a guy that I’ve known for a long time personally and has a great reputation professionally.”

During Young’s seven seasons with Oakland, A’s pitchers posted an AL-best 4.03 ERA and held opponents to an AL-low .257 average. Also during that time, seven A’s pitchers made the All-Star team, and Huston Street (2005) and Andrew Bailey (2009) won Rookie of the Year honors.

Young replaces 2010 A’s pitching coach, Ron Romanick who let go at the end of the season. You can read the official announcement on the A’s website here.