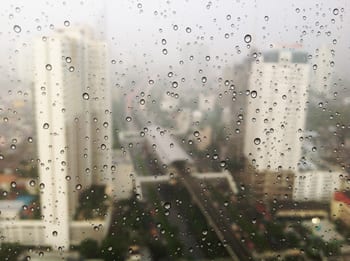 As fall rolls around and winter grows ever closer, the cold weather sets in. While some people like to use the stormy season to get work done indoors, taking advantage of the free time, others (like us here at College News) prefer to take the opportunity to get cozy on the couch, grab some snacks, and turn on our favorite movie. If that sounds appealing, then this list will be exceptionally helpful to you. Here’s a list of the seven best movies to watch on a rainy day.

This iconic film about the founders of Facebook was an instant classic when it hit theaters in 2010. The film served as a turning point for Jesse Eisenberg’s career, as well as featuring amazing performances by Andrew Garfield and Justin Timberlake. Plus, the classic brooding darkness of director David Fincher couples perfectly with the rainy weather outside.

Another dark and brooding film, the 2014 neo-noir crime thriller highlights Jake Gyllenhaal’s duality as an actor. With twists and thrills never expected, this film will leave you moderately unnerved and craving more Gyllenhaal.

Speaking of craving more Gyllenhaal, this film will help you with just that. Not only does it feature one of Gyllenhaal’s best performances, it also showcases the late Oscar-winner Heath Ledger. One of the best romantic stories to date, this movie is an emotional rollercoaster from start to finish.

You knew there had to be at least ONE Star Wars flick on here. George Lucas’ incredible sci-fi universe sent shockwaves throughout the film community—and the world—when the first installment of the original trio was released in 1977. So why not save the best of the original three (*ahem* “The Empire Strikes Back”) for a rainy day?

Did You Catch The Revenant movie this year? Read our Review.

The most recent release on this list, this horror thriller is an instant classic (and already on Netflix, so it’s super easy to watch). A new take on a genre already so overdone, the story revolves around a deaf woman living alone, being stalked by a murderer. As the storms set in this fall, be sure to catch this one in the dark and creepy weather.

Although storms and rainy days can become a little monotonous, there’s nothing like a classic suspenseful crime drama to switch things up. Kevin Spacey shines in this film with wonderful editing, cinematography and a stunning script. Overall, this film is just a masterpiece—every part of a perfect film in one.

Yeah, there had to be at least SOMETHING cute on this list. With the rain coming down outside, it can be good to watch something bright, colorful and fun. This underrated Disney classic lacks a princess, but still tells one of the best love stories in a Disney film, and shows off some of the best animation Disney has ever put out.

So, even with the rain coming down outside this fall, don’t be afraid to cuddle up with some friends (or alone, no judgement) and grab some popcorn and candy corn and watch any of these flawless films.

You’ll also enjoy: Pokémon Go is for Everyone!