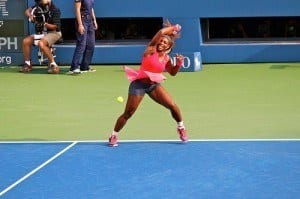 Serena Williams became one of the most undeniable forces in sports when she reclaimed her crown as queen of the court upon her win of the 2013 US Open yesterday. Serena Williams had two opponents during the match. Not only did she have to battle the world’s number two player Victoria Azarenka, but she also had to battle the abrasive gusts of wind at the Arthur Ashe Stadium in Flushing, New York.

Williams expressed her frustration after her first miss when she said, “I can’t play in this wind.” Serena Williams’ intensity increased as the game raged on, but her taking the title almost slipped from her grasp with Azarenka breaking Serena’s serve for the match at 5-4 and 6-5, but Serena W      illiams quickly reclaimed the match for herself when she amped up her game to full capacity during the third set.

“In the third set, Serena really found a way to calm down and restart from zero and quickly erase what happened,” said Patrick Mouratoglou, Williams’ coach.

Although Azarenka was clearly disappointed with the results of the match, she remained humble and exhibited true sportsmanship. “It is a tough loss, but to be in the final and play against the best player who deserves to win today- it’s incredible,” the Belarus native said. “I gave it all today. We showed our hearts. We fought hard.”

Serena Williams took the title for her own after the 2 hour 45 minute match, and made history with the win. This marks the 17th Grand Slam single title for Williams, with her winning her first title in 1999 when she was just the ripe age of 17. Williams weighs in at five US Open titles, five from Wimbledon, five from the Australian Open and two from the French Open. This gives Serena Williams the sixth most titles in history, and with her unrelenting determination there is a high possibility she may have the most in history.

“I’m already thinking about what I could have done better. I think I’m a little crazy in that way, like something must not be right, because I don’t even relish in the moment enough,” explained Williams. “I just automatically think: what’s next?”

Serena Williams’ win also helped her make history with her current salary. Serena Williams collected a $3.6 million prize and a $1 million bonus for her wins during the North American hard-court circuit leading to the U.S. open. This makes Serena the first woman to top $50 million in career earnings.

The trophy comes as an early birthday present for Williams who turns 32 in two weeks.