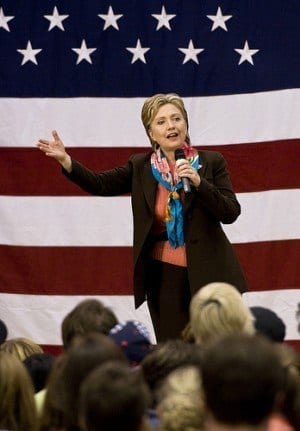 Just one day after facing Republican critics over the September terrorist attack on the U.S. Embassy in Benghazi, Hillary Clinton is gearing up to introduce Senator John Kerry for his Senate confirmation hearing for Secretary of State.

Hillary Clinton has been the subject of much news coverage over the past few weeks, beginning when she hit her head after fainting from a stomach virus that caused serious dehydration.

But she was back to work yesterday, focused, determined, angry and emotional at times, in front of Senate Republicans critical over her department’s handling of the attack on Benghazi, according to a report by CNN.  Ambassador Christopher Stevens was killed in the attack, and the safety of American tourists and military personal has been uncertain since the scandal broke.

“As I have said many times since September 11, I take responsibility,” said Clinton as she faced two congressional hearings on the attack, both of which totaled nearly five hours.

However, placing blame wasn’t enough for conservative Republicans, who were concerned over the level of security at the Benghazi compound during the attack.  They questioned Hillary Clinton about the now infamous report by U.N. Secretary Susan Rice four days later that blamed a spontaneous protest gone wrong for the attack on the Benghazi compound.  Secretary Rice had previously blamed the attack on a protest over an anti-Islam film produced in the United States.  Intelligence would later show that the attack was, indeed, a coordinated attack by extremists.

At both hearings, Clinton acknowledged the “systematic breakdown,” according to an Accountability Review Board appointed by her to analyze the causes leading up to the attack.  Hillary Clinton accepted all 29 of the board’s recommendations, adding her department was taking additional steps to increase security at U.S. diplomatic facilities around the world, according to a report by CNN.

In response to the erroneous talking points released to the media on September 16 by Secretary Rice, Secretary Clinton said that she was more focused on ensuring the safety of American personnel at other international facilities where protests were taking place, adding, “I wasn’t involved in the talking points process.”