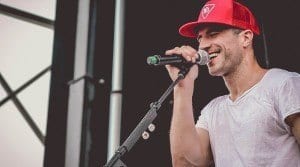 Following the release of his defining and somewhat controversial debut album, Montevallo, Sam Hunt recently announced that he will be setting out on his 2015 Lipstick Graffiti tour.

The tour will kick off on Jan. 29 in West Hollywood, California and will run through mid-April, making stops in Denver, Chicago and Boston along the way.

The tour comes after the successful release of his debut album, Montevallo which garnered the chart-topping single, “Leave the Night On” which has since been followed up by his latest single “Take Your Time.”

Supporting Hunt on the Lipstick Graffiti Tour are Native Run and Michael Ray.

Originally a football player from the University of Alabama, Hunt first got his start in music when he learned to play Kenny Chesney’s, “What I Need to Do” on guitar. Hunt has a southern approach to music but his liking for R&B and hip-hop heavily influence his original work and throw him into the heated controversy of the future of country music.

For more information regarding tickets for the Lipstick Graffiti Tour click here.

Check out the official music video for “Leave the Night On” here.