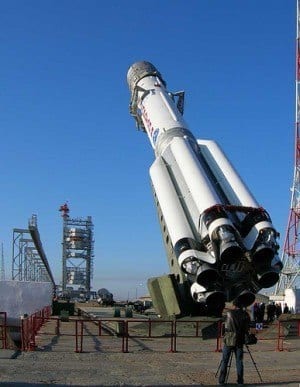 A Russian launch of two multi-million dollar telecom satellites late Monday resulted in failure, casting doubt on what was once considering a pioneering space industry.

The Russian launch of two satellites, Indonesia’s Telkom-3 and Russia’s Express MD2, was intended to provide both countries with telecom services. However, the botched launch of the Proton rocket stranded both satellites far below their intended orbit.

The error occurred shortly after the rocket’s launch from the Russian-leased Baikonur launch pad in Kazakhstan late Monday. The reason for the Russian launch failure has been attributed to the premature shut down of the Breeze M hydrazine-fueled rocket engine.

“According to the currently available data, the third burn of the Breeze M main engine occurred as scheduled,” said a statement released by Khrunichev, the Russian contractor for the Proton rocket and the Breeze M upper stage. “However, the engine was cut off within 7 seconds instead of after the nominal 18 minutes and 5 seconds.”

According to tracking data from the U.S. Air Force, the rocket and both satellites reached an orbit ranging in altitude from 165 miles to 3,118 miles with an inclination of 49.9 degrees.

“The chances that the satellites will separate from the booster and reach the designated orbit are practically non-existent,” according to an industry source who spoke with the state news agency RIA. The source continued to say that further Proton rocket launches will likely be suspended pending an investigation into the failure.

The Telkom-3 satellite was the first satellite Jakarta purchased from Moscow. It was built by Russia’s ISS-Reshetnev and included equipment built by satellite maker Thales Alenia Space. The satellite had the capacity of 42 transponders, designed to contribute to Indonesia’s growing demand for telecommunications services.

The Russian Express MD2 satellite was built by the Khrunichev State Research and Production Space Centre for the Russian Satellite Communications Company (RSCC).

The loss of the two telecom satellites is estimated between $100 million and $150 million, a source within the space industry told Interfax news agency.

The failure of Monday’s Russian launch echoed the 2011 incident that resulted in the loss of the $265-million Express AM-4 communications satellite. That mission also deposited its satellite into the wrong orbit after the Breeze M upper stage lost control of its orientation in space as the result of a programming error.

Industry expert and member of the Russian Academy of Cosmonautics, Yuri Karash spoke of the recent failures, “The last failures to a certain extent undermine Russia’s position as a country that provides space launch services.”

Karash described Russia’s space industry as “not in the best condition by a long shot.”

The next Proton/ Breeze M launch was scheduled for Aug. 23 with the Intelsat 23 commercial communications satellite, but has been suspended pending an investigation into Monday’s launch failure.