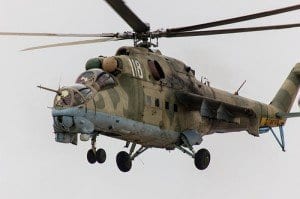 The insurance for the MV Alaed has been cancelled, rendering the ship incapable of finishing the voyage

The Russian helicopters bound for Syria on board a Russian ship have been stopped en route off the coast of Scotland after its insurance was cancelled at the behest of the British government.

The British marine insurer Standard Club issued a statement that said it had withdrawn insurance for all ships owned by Femco, a Russian cargo line, including the MV Alaed.

“We were made aware of the allegations that the Alaed was carrying munitions destined for Syria,” the London-based Daily Telegraph quoted the company.

The company continued, “We have already informed the ship owner that their insurance cover ceased automatically in view of the nature of the voyage.”

The MV Alaed became the focus of international criticism last week after U.S. Secretary of State Hillary Clinton revealed the ship’s cargo would add to the arsenal of munitions used by the Assad regime against Syrian rebels and rebel strongholds.

The MV Alaed, loaded with its cargo of Mi25 Russian helicopters, known as “flying tanks,” departed from the Russian port of Kaliningrad where the helicopters had been sent to the state-owned manufacturer’s Mil’s Factory 150 for servicing and repairs, according to a source close to Russia’s arms exporting monopoly Rosoboronexport.  The nine Russian helicopters are refurbished, not new, as earlier reports indicated.

British security officials told the Standard Club that providing insurance to the MV Alaed would likely be a breach of European Union sanctions against the Assad regime.