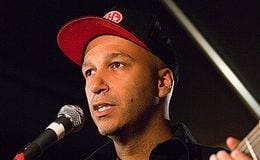 This week brings the latest from 3 Doors Down, They Might Be Giants, 311 and Tom Morello

Even though I’m fighting a cold and a Chicago heatwave (seriously, it’s suppose to be 97 degrees on Thursday!) I was able to find you a few choices that you might want to gander at. This week proved to be a versatile one, with all sounds represented here for your enjoyment. Hope you like it.

Let us start off with something for you indie rock fans. For decades, TMBG have been the staple of the quirky, whimsical music that will please the most hardcore of hipsters. Hell, I still remember songs like “Istanbul” and “Particle Man” to this day. Now with ”Join Us” they continue the trend, with songs like ”Cloisonne” and “Can’t Keep Johnny Down.” Surely, fans will certainly enjoy this bit of off-the-wall goodness.

And here’s yet another band that can whip up a catchy-ass song or two. After a self-titled 2008 album, the Mississippi band is at it again with this album of intense and listenable tunes. By now, you’ve heard the single “When You’re Young” and can’t get out of your head even if you had brain surgery. “Young” and “Heaven” will forever be stuck in your head as well. You’ve been warned.

Well the catchiness keeps rolling in with 311. I’m sorry, but I’m a sucker for a good bassline. That’s just me and I can’t help it.  It’s my crack. That being said, 311’s ”Universal Pulse” has some sweet basslines that will satisfy any lover of the low end. For example, “Trouble” features the reggae/rock hybrid that made 311 so unforgettable. “Time Bomb” starts off the album with a rockin’ and bouncy sound that get people jumping up and down until their feet are blistered.

Since I know some of you need a Tom Morello fix, here is something from his solo project, The Nightwatchman. ”Union Town” is an EP of pro-union songs because, well, it’s Tom Morello and that’s how he rolls. All the proceeds from the record will go to The America Votes Labor Unity Fund. If you’re looking for the guitar wizardary that Morello’s known for, you’ll be disappointed. Instead, the EP consists of eight songs of his left wing politics. Fencewalkers need not apply. Check out the video for “Union Town” below.