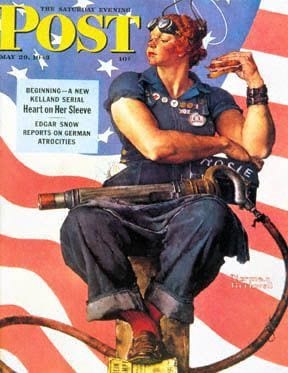 A 19-year-old telephone operator posed for artist Norman Rockwell, for a portrait that would become the cover of the Saturday Evening Post on May 19th, 1943. The woman in the portrait would forever come to be called, Rosie the Riveter. Rosie the Riveter was actually Mary Doyle Keefe, who died on Tuesday, the 21st of April, at the age of 92.

Rockwell’s painting of Keefe was a testament to the strength and courage of America’s woman during World War II. Keefe, who happened to be the neighbor of Rockwell at the time, was offered $10 for her time, and sat for the picture in the artist’s Arlington, Vermont home. The picture of Rosie the Riveter, shows a red-haired woman, eating he sandwich, clad in blue jeans, her rivet gun on her lap, and her feet resting on Hitler’s autobiography “Mein Kampf.”

Rockwell sent Keefe a letter later, stating that he was sorry for making the petite Keefe a little larger than she actually was. In his letter, he told her, “I did have to make you into a sort of a giant.” Keefe didn’t mind. She went on to receive a degree in dental hygiene from Temple University, got married, gave birth to four children, had 11 grandchildren, and five great-grandchildren, before passing.