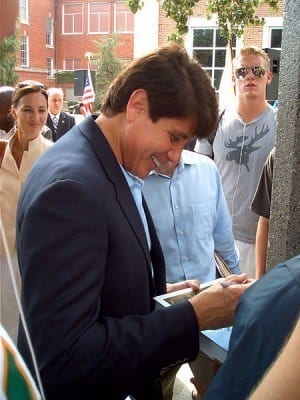 The former governor of Illinois left his home Thursday morning for a Colorado federal prison.

Convicted former Gov. Rod Blagojevich left his home this Thursday morning to board a plane for Colorado where he will spend his 14-year prison sentence.

Rod Blagojevich pushed through the crowd of reporters and bystanders outside of his Chicago home just after 6 a.m. His wife and daughters did not walk to the car with him, but his wife, Patti, was seen standing by him crying Wednesday night.

Patti Blagojevich has proclaimed her husband’s innocence since the beginning of the corruption case against him.

Rod Blagojevich boarded a plane from Chicago to Colorado where he is expected to report to a prison by 2 p.m. this afternoon. He was not taken in handcuffs and will check into the prison like checking into a hotel. But, instead of a bath robe, he’ll be given a khaki prison uniform and become Inmate No. 40892-424.

Rod Blagojevich was convicted on 18 counts of corruption, including charges that he tried to sell or trade President Barack Obama’s old Senate seat.

Wednesday night, Rod Blagojevich spoke for 10 minutes in what has been called a “campaign-style” farewell. He insisted that he never intentionally broke the law and thanked voters for electing him governor twice.

“Saying goodbye is the hardest thing I’ve ever had to do,” Rod Blagojevich said,” I’m leaving with a heavy heart, a clear conscience and I have high, high hopes for the future.”

Rod Blagojevich is the second Illinois governor in a row to go to prison for corruption.