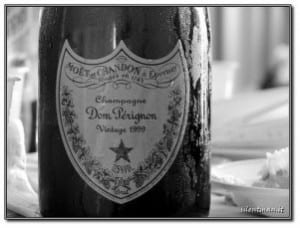 Rich Kids of Instagram became popular because let’s be honest, it’s interesting to see how those who live outside of the nation’s average means spend their time and money. The site, with a hint of mockery, frames the selected Instagram photos in a gaudy gold frame and rocks the subtitle “They have more money than you and this is what they do.” The photos range from wealthy young adults and their new toys (read: planes and Bentleys) to champagne pong. Apparently Dom Perignon is the champagne of choice.

The site is comical, sometimes at the wealthy kids’ expense, and is starting to garner negative attention as the daily activities of those in the pictures are seen as overly lavish and extravagant. What was originally just for entertainment has turned into a bit of a critique-fest as followers are more or less disturbed by what they see on the website. One photo is simply a picture of a receipt from a vacation dinner…but for almost 100,000 euro. In one case, Alexa Dell, daughter to multi-billionaire Michael Dell, posted a picture to Instagram of her brother sitting down to a feast on their private-jet en route to Fiji. The photo was picked up by the Rich Kids of Instagram Tumblr page but soon taken down for being too over-the-top and posing a potential security risk. Alexa’s father reportedly spends a vast amount of money on private security and assumedly didn’t want such family happenings spread on the web.

While many of the Instagram users featured on the site are proud of their photos, some are also “embarrassed” and “don’t want to be associated with this,” according to “the Inquisitr.” What is frivolous and unnecessary to the average American is normal and well within the budget for the privileged American. A lot of the photos are, in fact, rather normal, such as one of a couple of fashionable bracelets on one girl’s arm. It’s just that the bracelets happen to be Hermes and Cartier and are worth nothing short of a small fortune.

The Rich Kids of Instagram site is said to be along the likeness of MTV’s “My Super Sweet Sixteen” and Bravo’s “Housewives,” where an interest in the nation’s wealthy elite is driven by a personal desire for unlimited indulgence. It’s interesting to see what others do with their never-ending funds, though maybe not so fun when those watching the shows and reading the blogs are reminded of their own modest reality. But is it fair to feed the culture’s fascination with wealth and status yet simultaneously claim resentment for those indulging in a more privileged lifestyle?