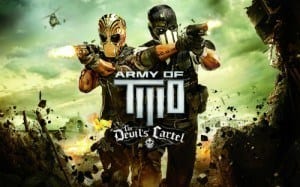 The One Night Stand of Videogames

In the continued events of the Army of Two franchise, many fans will often ask simply, “Why are we seeing sequels to this game?” Without a massive following nor sales numbers to back it up, the general gaming population is left at a loss as to why this franchise lives on. Despite a shallow storyline and solid, but basic shooting mechanics there’s really only one justification: charm. In a world where gamers clamor for deep story and intricate combat scenarios, Army of Two: Devil’s Cartel delivers narration to rival some of the great, cheesy action movies from the 80’s. Unfortunately, the story seems to take itself serious most of the time, which causes it to suffer. Tip-toeing around the fourth wall, the game has gratuitous explosions, gruesome violence and drowns players in bromance between Alpha and Bravo, but the third title in the series fails, again, to ascend to greatness.

Tactical Worldwide Operations — the TWO in Army of Two — plants new recruits, Alpha and Bravo, in the midst of a Mexican drug cartel’s territory in order to escort a high-value target through it safely. During the mission, surprising only the characters in the game, the group is attacked on the street, igniting the premise for the rest of the game — yes, there is story beyond dashing cover to cover and shooting bad guys. It’s at that moment that the story spins off into a strange mixture of intrigue and apathy, providing a small carrot-on-a-stick to the player in order to justify why Alpha and Bravo should continue on in the face of countless adversaries. It’s that precise challenge that adds personality to the entire TWO organization though, hiring only the baddest of the bad, the toughest of the tough, each with an attitude that rivals that of a stereotypical fraternity.

To match the wit, sometimes juvenile and sometimes genuinely funny, a unique weapon and character customization option is presented to allow players to create a character that matches their own tastes. Weapons from assault rifles and shotguns to LMGs or sniper rifles each have coloring options and can hold a number of attachments that provide different benefits or penalties. In addition, the tell-tale masks of the TWO organization can be modified to look like one of the dozens of choices available; not high on the pre-made options, players can opt to create their own and show off their own design skills.

Like the story, the gameplay itself is mediocre and relies on players dashing from cover to cover in order to defend from the constant storm of bullets that greet you at every turn. Should you get antsy or if your cover is destroyed — the game runs on the Frostbite engine, the same used in the latest Battlefield titles — and you’re peppered with bullets, it’s not the end. Your partner will run out, against all odds, to save the day and return you to the battle. The height of being a member of TWO though, is the ability to just say, “to hell with it,” and become a badass. If you happen to dispatch a number of enemies in particularly varying ways, melee, firearms, or environmental explosions, your Overkill Meter fills up and, much like previous games, grants the ability to become invulnerable for a short period. During your state of God-like power, bullets are endless and guns don’t need to be reloaded, ensuring that anybody silly enough to get caught in your crosshairs, is quickly removed from them.

Army of Two: Devil’s Cartel  isn’t going to win game of the year, and anybody playing can see this game for what it is: a good time and nothing more. AoT:DC isn’t a game that you marry, it’s not a game that you bring home to meet your parents. It’s a one-night stand. It’s a game you play through, having some meaningless fun, and then discard in the pile and move on. It’s not going to challenge you intellectually, but it might cause some shy embarrassment if you catch eyes with the friend who helped you tag-team the cooperative mission. Regardless, it’s silly fun and will have you rolling your eyes — in a good way — during most scenes.