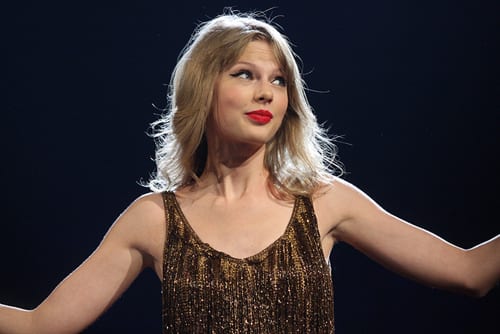 Taylor Swift dropped her new song and it is on fire

The single Look What You Made Me Do was released at 12:01am EST on Friday August 25. A lyric video with a noir feel to it accompanied the track on YouTube and  is a good representation of what the song is trying to say: don’t mess with Taylor, because she’s an all-new badass.

The syncopated beat has been borrowed from Right Said Fred’s I’m Too Sexy (1992) which works in a weird kind of way—the reference is subtle enough that you don’t immediately notice it, but evokes the memory of the number one song enough to make Swift’s single a guaranteed hit.

It’s hard, purposefully edgy and more on the electro side of pop than her usual pop-princess act. She’s ditched the rise-above-it attitude of Shake It Off (2014) and has gotten down and dirty in her revenge fantasy. Still, as the title suggests, it’s not her fault—someone else made her do it.

Like a lot of Swift’s songs, there’s a certain mystery as to whom the song is about.

Swift has had a fair few alleged altercations in the past few months. Katy Perry released her single earlier this year, Swish Swish, which—on numerous occasions—Perry herself has said is directed at Swift. It can’t be just a coincidence that Perry’s music video came out the day before Look What You Made Me Do.

Other people are looking to Kanye West—his and Swift’s long-standing feud has been a subject of public chatter for years. The bridge of the song shows a woman on the phone in the lyric video and Swift speaking with a phone voice effect, perhaps referencing the call between the two that was recorded without Swift’s consent.

The one thing that’s for sure, is that Swift has been using a lot of snake images alongside the single. She teased her fans with clips of what looked like a coiled snake on her Instagram and Twitter accounts prior to announcing her new album, and the lyric video shows a kaleidoscope of snakes biting their own tails.

The most shocking part about this new release is the step away from Swift’s classic good-girl image. Even with the more vengeful tracks on her last album—Bad Blood (2014) and Blank Space (2014)—she sticks to her stance of the innocent victim, but in this new song she sings about getting “harder” and that “nobody trusts [her]”.

This ‘new Taylor’ is just a new reboot in a long line of people trying to strip themselves of their innocent image. Think Miley Cyrus, Bella Thorne, Justin Beiber, etc: they start young and at some point find themselves in need of a change. Having released her first album at the age of 16, this remodelling was inevitable.