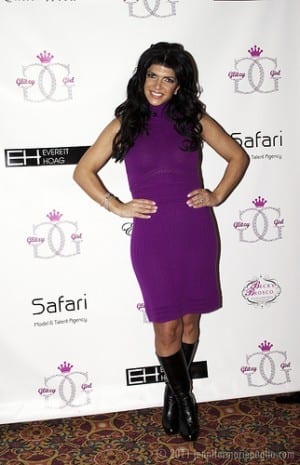 The Real Housewives of New Jersey “star” Teresa Giudice and her husband, Joe, have been charged with fraud in a 39-count indictment by the federal government. The charbroiled child-bearer and her man are accused of conspiracy to commit mail and wire fraud, bank fraud, making false statements on loan applications and bankruptcy fraud.

Teresa Giudice, whose claim to fame is flipping over a dinner table or some such, will face up to 50 years in prison, along with her husband. A wealthy New Jersey Italian-American family accused of breaking federal law? Teresa Giudice and her husband are really working hard to fight nasty stereotypes, I see.

Joe and Teresa Giudice are accused of submitting fraudulent loan applications for seven years leading up to the debut of The Real Housewives of New Jersey on Bravo. Joe Giudice also failed to file tax returns from 2004 through 2008, when he allegedly made almost $1 million.

The indictment claims that when Teresa Giudice filed for a mortgage loan of $121,000 in 2001, she falsely claimed she worked as an executive assistant, submitted fake W-2 forms and fake paystubs along with it. It looks like the “Real Housewife” was working relatively hard at her fake job; so there’s that.

From her Twitter account, Teresa Giudice said “I am committed to my family and intend to maintain our lives in the best way possible, which includes continuing my career.”

Wait, is she referring to her fake job on Bravo or the fake job that she told the government she had? I’m confused.

Bravo has yet to comment on the situation but I can see it now: a lavish “After Hours” chat with Teresa Giudice, the U.S. Attorney running the case and probably Sheri Sheppard for some reason. The satin pillow-stuffed event will of course be hosted by human boutonnière Andy Cohen.