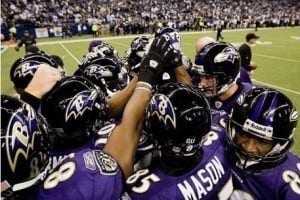 Ravens linebacker Ray Lewis is dealing with rumors that he tried to illegally speed his recovery from a torn triceps, Baltimore Ravens fans showcase the myriad types of superstitions that they practice on game day, and the Ravens defense plays overtime.

Lewis, a vital component of the winning Ravens team, has said he feels “agitated” that his name has been used in connection with performance enhancing drugs.  The ravens star vehemently denounced allegations by Mitch Ross, co-owner of Sports With Alternative to Steroids that he had ties to deer-antler velvet spray.

In other news, the rest of the Ravens defense is coming off a season of delivering punishment and bad news to any challengers.  This season the Ravens defense has been on the field for 1,342 plays, the most that any defense has played since 2001.  In the postseason alone the Ravens meted out an average of 85.4 snaps.  The line’s impessive record bodes well for the team, as the only other defensive line to play over 1,300 snaps on the field are last year’s champions, the New York Giants.

And in weirder news, Ravens fans Baltimore-wide indulge in tried and true sports traditions that are “only crazy if they don’t work.”  These Silver Linings Playbook-esque practices are nothing new to the world of sports aficionados, but it’s always a fun eye roll to read about some talismans.  One family has to keep their soft purple football in the exact off-center of the room for every game.  Another pulls out a handful of cards before every game, shouts out the player’s name, rips the card in half and sets it in the coals.  I read somewhere that cavemen also used to throw spears at drawings to prepare for a successful hunt.  Same seat positions, same floors of the house, same clothes—all incredibly vital juju for any winning season.  Since the Ravens haven’t gotten to this point since the 2001though, there can never be enough positive vibrations.